So, after a casual but uneventful time that was the day before, I woke up with higher expectations, since I had been looking forward to a session of the following day. (Though my expectations for the venue’s WiFi were next to nothing, as much as I had wanted it to be different. Why is it that every tech conference ends up with the WiFi crashing and burning within the first few hours?) This time, it was a presentation about Nightfall, a project by Ernst & Young to help businesses operating within a private chain (i.e., a consortium) anonymize those private transactions when publishing them on the public chain. Since Ernst & Young has done significant Ethereum projects in the past (like the one for XBox publishers), it makes sense that they would pursue this one.

I love the idea of this project since 1.) it helps businesses embrace the idea of public blockchains while keeping their trade secrets hidden from competitors and 2.) it still ultimately leaves an auditing trail. Since most enterprises are still apprehensive about trying something new like a blockchain platform, these kinds of projects are necessary as the potential bread crumbs that will entice companies to follow. Of course, you don’t have to listen to me. Instead, you should listen to Paul Brody, the leader of the project who presented his team before they took over and helped explain the inner workings of Nightfall:

And if you want me to explain the zk-Snarks that enables Nightfall, to detail its mathematical complexity, then I would instead tell you that it’s magic born of fairy dust, because that sounds more comprehensible to me. In truth, I do understand it on a superficial level, but I lean heavily towards the theory of fairy dust. After the lecture, I did speak with a couple members of the Nightfall team, describing my own project to them. If you were to ask them about my project, they might also suggest a dust or powder inspired me to even build such a thing. All in all, though, it was one of my favorite presentations of the conference.

After that, I quickly made my way to the top via the elevator (since the conference essentially was split between the basement and the top floor), so that I could learn through an interactive session about a potentially useful tool. If you’ve ever deployed and tested Solidity contracts to a local Ethereum client, then you know how annoying it can be to restart the node, deploy the code, and reintroduce the lost state, every time that you need to make a correction to the code. Wouldn’t it be great to have hot swap capability, so that you can deploy and test the code without all that hassle? Well, that’s what OpenZeppelin’s Igor Yalovoy set to fix, as he described in his session:

I liked what I heard about the Solidity Loader. When I need to test the Wonka contract again, I might take that for a spin.

And just when I thought that something like zk-Snarks was complicated, I tried to test the boundaries of my mind and follow Karl Floersch’s lecture about the implementation for Plasma and Ethereum 2.0:

That proved to be a mistake, since my vision went kaleidoscopic at one point while trying to follow along. Though, I will give it to Karl: he did warn us at the beginning that none of us would follow it. I argue, though, that he should have warned us about the possibility of seizures or passing out.

And even though Mr. Floersch is obviously very bright and optimistic (of which the latter is alien to those of us with grey whiskers), he and 90% of the attendees have that rosy hue of youth, which is disheartening since it reminds me of my imminent death, hovering and chuckling over the nearby horizon. So it was nice to hear a lecture from someone even older than me, someone that I even read about it in college: David Chaum! Now, there’s a seminal OG in the realm of cryptography and computing in general! As the creator of DigiCash who also wrote about blockchains 35 years ago, he was truly a man before his time. So, it was cool to hear what he’s working on now, which turns out to be a cryptocurrency for his blockchain platform Elixxir that supports privacy-focused messaging, payments, etc.

If I even get to that age, I hope to still be going strong like that.

And I ended the day with a talk from the face and brains of Consensys, Joe Lubin:

For the most part, much like Buterin’s talk, it was a general update of the Ethereum ecosystem. But, more importantly, he ended his speech with a collective goal for the Ethereum community: to have a million developers working on Ethereum projects. A million! I mean, it’s possible…but…man. Well, I guess that I already have my New Year’s goal for 2020. Bad news for my friends, though: they’re gonna have to endure a verbose sales pitch, whether they like it or not.

Who’s doesn’t love Taiko drums? Well, if you don’t, you need some sort of intervention, since you’re out of your mind. And since we were in Japan, it was the perfect choice for the opening ceremony of the conference and to kick off the second day: 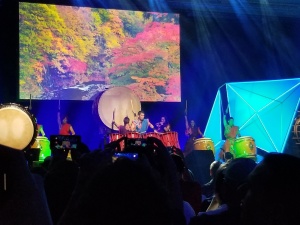 Day 2 was a bit more subdued, in terms of interactive sessions that I wanted to attend. But there was one, from the guy who helped make tokens/ICOs become a thing and the author of Mist and Web3: Fabian Vogelsteller.

I mean, what would this guy know about decentralization and Ethereum, right? All kidding aside, he took this opportunity to talk about one of his ongoing projects: ERC-725, which is aimed at creating interfaces and implementations for decentralized IDs on Ethereum. It was interesting, especially when it came to terms of his proposed implementation regarding management of keys for a user pool. However, I knew a little about its competitor project uPort, so I wasn’t totally convinced that it was the way to go. But still, it was cool to hear from a seminal member of the community.

Aside from that, the lectures were the majority of the day for me. And to start off, you couldn’t attend DevCon and miss the father of Ethereum: Vitalik Buterin. Even though it was just a general overview of Ethereum’s past and present, it was still enjoyable.

And there were other presentations, like one about the philanthropic efforts of the Ethereum community (especially how UNICEF now receives/disperses funds through Ethereum) and one in which Maker announced the launch date of multi-collateral DAI tokens: 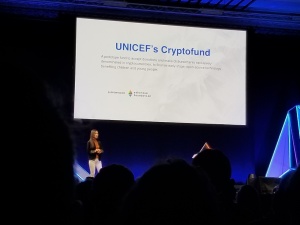 But all in all, I’d say that it was more of a relaxed day.

After all that and a MOS burger, I got the opportunity to meet someone who’s working on the TruSat project, which does sound amazingly ambitious and cool. After that high point, I decided to enjoy the tranquil, sunny day outside and to forget about the impending doom headed our way…when I was suddenly approached by a mysterious stranger. He introduced himself quickly and then proceeded to tell me that Mayan prophecies foretold the coming of a savior (pointing at cryptic icons on his shirt), who was none other than the Democrat party candidate Andrew Yang. “He is the chosen one described in ancient times.” And then he gave me a cap to remember the fateful day that will arrive soon:

Well, let it not be unsaid that you definitely meet interesting people at DevCon. Strange and perhaps out of their mind…but interesting.